DISCLAIMER: I don’t know much about Syria. My news watching has been pretty much limited to The Daily Show and Colbert Report, plus the occasional glance at news on Twitter. Here are a couple of articles that I came across that helped me out when trying to figure out what the hell was going on in Syria and why we, as Americans, should care. (And they are in list form, which always helps me out.) Washington Post and CNN

There’s been so much news lately about Syria and the possibility of going to war with a country that most of us can’t even find on the map. I’m not going to get political here, mostly because I feel like I do not know enough about the situation in Syria to accurately choose one side or another. However, I was catching up on my Daily Show with John Stewart this morning, and they interviewed Andrew Harper, who is head of the United Nations refugee agency in Jordan. (See here for the full interview.) In his interview, he stated that there have been 2 million refugees fleeing Syria into neighboring countries. Furthermore, out of those 2 million children, over 1 million are children.

ONE MILLION CHILDREN. It’s unfathomable to me.

When I was a child, I had the opportunity to grow up in innocence and faith in my government and my safety. I never worried about my parents survival or if I would have something to eat and a place to sleep at night. These children have had their lives ripped away from them in a political war that doesn’t really concern them at all.

This past weekend, I went to New Orleans and toured the WWII museum with my parents and Jeromy. It surprised me how much agony I went through when listening to the people tell their stories of their survival, their battles, and even their struggles at home. Stories of a mother losing both of her sons to casualties of war, wives who would never see their husbands again, husbands who struggled every day not knowing if they were going to live or die. Their struggles felt so personal to me, and the brunt force of the realities of war really struck me. Each person’s story that I heard felt like it was my friend or coworker speaking to me.

And these are Americans who fought in foreign nations. It is impossible for me to envision a world where I couldn’t be sure if I were going to walk on a land mine or have a bomb fall on my house. Yet this is something that these children have had to live with every day of their lives. They will never feel complete safety and innocence from the world around them. Now, if they haven’t already lost family members, they have at least lost their houses, all of their possessions, and their lifestyle.

I saw someone today tweet, “Why should we care about these people?” and my first thought is that they are PEOPLE. They are human beings who are suffering in a world that they were born into and have no real hope of getting out of. Do I think we should send bombs over there to cause further destruction? Maybe not. But I do think that we need to do all that we can to help these poor children, mothers, and fathers who are struggling every day to make a new life in a country that is not their own. If the situation were reversed, I would be thankful for every bit of help that I could get. 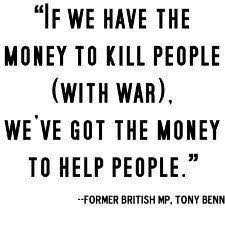 If you would like to help, here is the link for the UN Refugee Fund and UNICEF.