“For the two of us, home isn’t a place. It is a person. And we are finally home.”
― Stephanie Perkins, Anna and the French Kiss 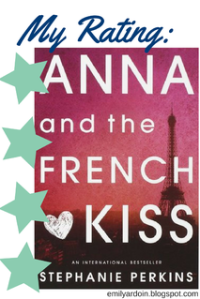 Can Anna find love in the City of Light?

Anna is happy in Atlanta. She has a loyal best friend and a crush on her coworker at the movie theater, who is just starting to return her affection. So she’s less than thrilled when her father decides to send her to a boarding school in Paris for her senior year.

But despite not speaking a word of French, Anna meets some cool new people, including the handsome Étienne St. Clair, who quickly becomes her best friend. Unfortunately, he’s taken —and Anna might be, too. Will a year of romantic near misses end with the French kiss she’s waiting for?

1. Light and airy. After reading Big Little Lies and A Monster Calls, I needed a pick me up. Those books were amazing, but so heavy, and I knew I needed something lighter to read. This book was PERFECT for that. It had enough depth to keep me interested, but it was a love story and there’s a comfort in (hopefully) knowing how it ends.

2. Nuanced characters. In YA chick lit, it’s easy for authors to fall into stereotyping teenagers, but Perkins doesn’t do that. She does a great job of slowly revealing the pasts of the characters and allows the reader to fall in love with each character slowly and intentionally. (Sidenote: Anna and the French Kiss is much better at this than the two sequels… but that didn’t stop me from loving the sequels as well). Speaking of..

3. THERE ARE SEQUELS. The best part about this book? It’s such a quick read, but there are two more books (so far) in the series. The other two books follow new characters, but our favorite characters make some cameos (Anna is a co-worker of Lola in Lola and the Boy Next Door and Isla is a student at the same school Anna attended in Paris in Isla and the Happily Ever After). I’ve read both of these books between Sunday (when I finished Anna) and publishing this post (3 days later). And now I want more from Stephanie Perkins.

Perkins does a great job creating humor and interest in this little love story.

“The more you know who you are, and what you want, the less you let things upset you.”

“I wish friends held hands more often, like the children I see on the streets sometimes. I’m not sure why we have to grow up and get embarrassed about it.”

“I mean, really. Who sends their kid to boarding school? It’s so Hogwarts. Only mine doesn’t have cute boy wizards or magic candy or flying lessons.”

“How many times can our emotions be tied to someone else’s – be pulled and stretched and twisted – before they snap? Before they can never be mended again?”