“We’re all weird and damaged in our own way. You’re not the only one.”
― Jennifer Niven, Holding Up the Universe 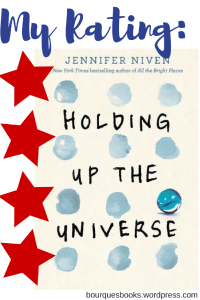 Everyone thinks they know Libby Strout, the girl once dubbed “America’s Fattest Teen.” But no one’s taken the time to look past her weight to get to know who she really is. Following her mom’s death, she’s been picking up the pieces in the privacy of her home, dealing with her heartbroken father and her own grief. Now, Libby’s ready: for high school, for new friends, for love, and for every possibility life has to offer. In that moment, I know the part I want to play here at MVB High. I want to be the girl who can do anything.

Everyone thinks they know Jack Masselin, too. Yes, he’s got swagger, but he’s also mastered the impossible art of giving people what they want, of fitting in. What no one knows is that Jack has a newly acquired secret: he can’t recognize faces. Even his own brothers are strangers to him. He’s the guy who can re-engineer and rebuild anything, but he can’t understand what’s going on with the inner workings of his brain. So he tells himself to play it cool: Be charming. Be hilarious. Don’t get too close to anyone.

Until he meets Libby. When the two get tangled up in a cruel high school game—which lands them in group counseling and community service—Libby and Jack are both pissed, and then surprised. Because the more time they spend together, the less alone they feel. Because sometimes when you meet someone, it changes the world, theirs and yours.

1. Sometimes I really hate Goodreads. Honestly. It’s a really good thing I’m more of a “oh look a new book, I’ll read it now” type of reader, rather than a “let me read what all the reviews say before I read it” type of reader. Apparently, when this book first came out, the blurb was offensive? I hadn’t heard of it, and they have updated it since then. So many people going on and on about how problematic the book was in regards to how they portrayed Libby (the fat girl) and her relationship with Jack… but I’m not sure they were reading the same book I was.
2. But first, some backstory. So before I read this book, I read 1984 (which I kind of hated, please don’t judge me), and before that, I read Little and Lion, which was my Book of the Month choice for August. And I also kind of hated Little and Lion. The main character was bi-racial and possibly bisexual, and also had a brother who was bipolar, and she was sort of in love with this other bi-racial guy who had a hearing disorder, but also maybe magically fell in love with this other bi-racial bisexual girl. I just… I love diversity in books, but that novel felt so contrived, so forced, so… well just kind of awful.
3. So when I started this book… I was worried it was more of the same. Fat girl who got cut out of her house, cute boy with a mental disorder… I haven’t read new YA books in a while, and I was worried that this is what it had become. Contrived. Diverse for the sake of diversity. Forced romances because romance solves everything. BUT GUYS. I was so wrong. This book touched my heart.
4. Libby. LOVE. Ok so Libby is “The Fat Girl” but also super compassionate and KNOWS WHO SHE IS. I love a good character who isn’t caught up in this cycle of constant self-doubt. Thank you, Jennifer Niven, for writing a character who is not scared to try out for the dance team weighing 200+ pounds. Thank you for writing characters who give us lines like:

YESSSSS. The one liners were strong with this one. Libby definitely didn’t have it easy, and she definitely didn’t always have her isht together, but her self-confidence and her unwillingness to back down was inspiring.
5. Also, Jack! Ok, I got a bit swoon-y over Jack. He’s this cute dude who can be kind of an asshole sometimes, but also, he loves his little brother and he stands up for what he thinks is right and he questions his motives and he honestly falls in love with Libby (sorry, maybe it’s a spoiler, but come on, this is YA). He has this disorder that keeps him from remembering faces, and honestly, I think Niven really wrote this character so well. I mean, he definitely should have told his parents sooner, but I could totally see a teenager reacting the way he did to the whole disorder thing (anger, confusion, being the class clown, etc.). Jack’s growth was really the reason I kept coming back to this book. Jack had a lot of external conflicts throughout the book, but his internal struggle was what intrigued me. I also loved watching Jack and Libby’s relationship blossom and watching Jack become someone who deserved Libby.
6. Side Note. This had a somewhat happy ending. If you like that sort of thing, don’t read Niven’s All the Bright Places. It is not like this book at all.

If you like YA, this is a good, quick, lovely read.

“Dear friend, You are not a freak. You are wanted. You are necessary. You are the only you there is. Don’t be afraid to leave the castle. It’s a great big world out there. Love, a fellow reader”
“People are shitty for a lot of reasons. Sometimes they’re just shitty people. Sometimes people have been shitty to them and, even though they don’t realize it, they take that shitty upbringing and go out into the world and treat others the same way. Sometimes they’re shitty because they’re afraid. Sometimes they choose to be shitty to others before others can be shitty to them. So it’s like self-defensive shittiness.”
“It’s my experience that the people who are most afraid are the ones who hide behind mean and threatening words.”
“We can’t fight another person’s battle, no matter how much we want to.”
“How can something so final happen in an instant? No preparation. No warning. No chance to do all the things you planned to do. No chance to say goodbye.”
“I think what an amazing world this would be if we all danced everywhere we went.”