“The thing about a spiral is, if you follow it inward, it never actually ends. It just keeps tightening, infinitely.”
― John Green, Turtles All the Way Down 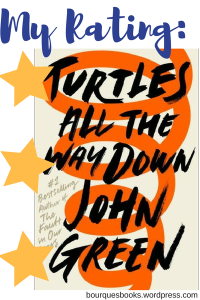 Sixteen-year-old Aza never intended to pursue the mystery of fugitive billionaire Russell Pickett, but there’s a hundred-thousand-dollar reward at stake and her Best and Most Fearless Friend, Daisy, is eager to investigate. So together, they navigate the short distance and broad divides that separate them from Russell Pickett’s son, Davis.

Aza is trying. She is trying to be a good daughter, a good friend, a good student, and maybe even a good detective, while also living within the ever-tightening spiral of her own thoughts.

In his long-awaited return, John Green, the acclaimed, award-winning author of Looking for Alaska and The Fault in Our Stars, shares Aza’s story with shattering, unflinching clarity in this brilliant novel of love, resilience, and the power of lifelong friendship.

1. Ugh. I wasn’t going to do this. I really wasn’t going to write a blog post. I put the book down, and I was like… meh. I have lots of feelings, lots of conflicting emotions, and dealing with the fact that I just read the first John Green book published in 6 years and I’ll probably have to wait another 6 years for another one… I have some emotions. I generally try to wait a few days until I’ve finished a book before writing the review, just to let it sink in, but, because I can never let anything die, I’ve been reading spoilery reviews about Turtles, and I have *opinions*.

2. First. What kind of John Green fan are you? If you say your favorite John Green book is Paper Towns (or if you even really, really liked Paper Towns), then, in addition to not being my friend anymore, you will also really like this book. I’ve come to realize there are two types of John Green novels: Paper Towns-esque and The Fault in Our Stars-esque. Don’t get me wrong. Both types of novels feature beautiful, metaphorical writing that makes me want to highlight every sentence in the book. Both types feature teenagers generally acting un-teenager-like, with parents who don’t seem to mind when they take cross-country trips in the middle of the night.

3. So what’s the difference? The difference is the level of FEELS. The Fault in Our Stars and Looking for Alaska hit me so hard. They punched my gut, they dragged me around, they changed me. Paper Towns (and the other stuff Green has written) are much lighter in their punches (slaps, really. or nudges?). They are not as heavy, not as dense, not as gut-wrenching.

4. But wasn’t this whole book about anxiety and OCD? Yes. And it’s a first-person POV, which is really difficult to read at times (because of the spiraling and repetition and wholly accurate reporting of what anxiety looks like). But everything about this book felt light, despite the thought spirals. The main characters were… ok. None of them felt like real teenagers with real teenage problems, even though I wanted to give each one of the a hug because were just full of drama.

5. But it’s YA, so of course there is drama. Yea but… some drama seems natural, and some seems contrived, and this book was full of contrived drama. It didn’t feel real or natural or close to anything that happens in the real world, and these teenagers felt more like caricatures than real human beings that I could connect with. The “mystery” of Davis’s dad was really a side-note to this whole thing, and existed more for the characters to react to than an actual plot line, which is disappointing because I think it could have been impressive. I love John Green.. he is one of the coolest people on the planet, but this novel just didn’t hit me like his others did.

6. But what are the good bits? Don’t get me wrong! This is not an awful book! If my expectations weren’t so high, I probably would have enjoyed this book more (which is super unfair, but also how my brain works). The words, as always, are beautiful. John Green is perfect at putting feelings into words in a way you never thought of but also in a way that so perfectly describes that feeling. He also did an amazing job depicting OCD and anxiety. He gave me new vocabulary to describe what I feel when I experience anxiety, such as spiraling or the idea of intrusive thoughts.

7. But in the end? The only thing this book had was its portrayal of mental illness. There wasn’t a clear and focused plot line. There wasn’t really a climax or a resolution. I feel like we got a snapshot of what Aza’s life is like, but the story didn’t end. And that was disappointing.

While John Green does an amazing job of depicting anxiety and mental illness, this book lacks the structure and focus it needs to make it a great novel.

“Anybody can look at you. It’s quite rare to find someone who sees the same world you see.”

“We never really talked much or even looked at each other, but it didn’t matter because we were looking at the same sky together, which is maybe even more intimate than eye contact anyway. I mean, anybody can look at you. It’s quite rare to find someone who sees the same world you see.”

“Your now is not your forever.”

“Whether it hurts is kind of irrelevant.”

“Worrying is the correct worldview. Life is worrisome.”

“It’s a weird phrase in English, in love, like it’s a sea you drown in or a town you live in. You don’t get to be in anything else—in friendship or in anger or in hope. All you can be in is love.”

“Every loss is unprecedented.”